How Motorcyclists Can Anticipate Careless Drivers to Avoid a Deadly Crash

Many motorcyclists in Texas love the long, open roads and year-round riding weather. They keep their bikes in good condition and don’t take risks, especially when riding in heavy traffic. However despite every effort to be safe, motorcyclists are still at the mercy of other drivers. When those drivers fail to yield and refuse to give a safe buffer, motorcyclists can end up in an accident and suffer serious injuries. The attorneys at Parker Law Firm encourage all motorcyclists to contact them soon after an accident to get skilled, experienced help. 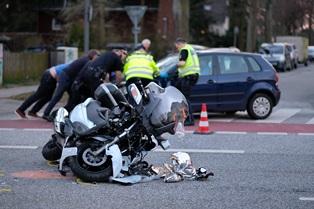 How Careless Drivers Cause Motorcycle Accidents

Over half of all fatal motorcycle crashes involve another vehicle. In many of these crashes, the motorcyclist was doing absolutely nothing wrong when he was blindsided by a careless or negligent motorist. It’s important for motorcyclists to know the most common types of collisions with cars, what causes them and how they can be avoided.

Head-on collisions cause 78 percent of all fatal car-involved motorcycle crashes. These crashes occur when a careless driver:

In all of these situations, a biker may be able to avoid the crash by anticipating the driver’s carelessness. Motorcyclists should always assume that drivers do not see them and slow down when they see a car preparing to pull out. At intersections, bikers should make eye contact with a driver before pulling out, even if it is their turn to proceed. Finally motorcyclists should ride with the assumption that cars are not going to give them the space they need.

When a car hits a motorcycle from the side—known as a T-bone crash—the results can be devastating for the biker. These crashes can happen when a negligent driver does the following:

There is not much a motorcyclist can do to avoid being T-boned by a car, other than making himself as visible as possible. Keeping headlights on at all times, wearing bright, reflective gear and acting predictably are the best ways to avoid being hit.

Motorcycles are not often rear-ended by cars, but when they are, it can result in a serious accident. These accidents happen when a driver is distracted and fails to see that a motorcycle has slowed or stopped in front of him. While a car might be big enough to catch a distracted driver’s attention, a motorcycle may not be, and the car could slam into the back of the bike. With no protection other than what he is wearing, a rear-end collision could cause debilitating or fatal injuries to the biker. The motorcycle could be pushed into a larger vehicle in front of him or into oncoming traffic, making the crash even more devastating.

Have You Been Injured In A Texas Area Motorcycle Accident?

If you or a loved one has been injured in a Texas motorcycle accident you need to speak with an experienced motorcycle accident lawyer as soon as possible. Contact us online or call our Bedford, Texas office directly at 817.440.3888 to schedule your free consultation. We help motorcycle accident victims throughout Dallas, Fort Worth, Arlington as well as all areas of Texas