While there are far fewer crashes with semi-trucks each year than there are between two passenger cars, a crash with a big rig is often fatal for the driver of the smaller vehicle. Given the potential for catastrophic injuries and death, it is particularly noteworthy that fatal truck crashes are on the rise. In 2016, the most recent year for which data is available, 4,317 people were killed in crashes with semi-trucks across the country. On Texas roads, 584 people were killed by trucks in 2016. 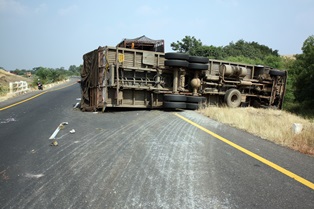 Truck-Related Accident Deaths Are on the Rise

The national fatality rate for truck accidents in 2016 is the highest it has been since 2008. While truck crash fatalities had been in an overall downward trend since a peak at over 6,000 deaths in 1979, this recent spike may indicate a new era of truck safety issues. As the infographic on this page illustrates, 250 more people were killed in 2016 than in 2015, and 350 more people died than in 2013.

Many people encounter commercial semi-trucks on urban interstates and highways, but according to the Insurance Institute for Highway Safety (IIHS), only 32 percent of fatal truck crashes occurred on interstates or freeways. Sixty percent, occurred on other major roads. Not surprisingly, only about 3 percent of the victims are occupants of the large vehicle, while 97 percent are occupants of smaller passenger vehicles.

Driving a semi-truck is a difficult job. Not only are truckers under tremendous pressure to deliver loads on time, they can cause severe damage with devastating consequences if they crash. Thus it’s essential that employers provide truck drivers with the proper training to safely handle a big rig. But no matter how good the training, there has still been an increase in truck crashes. It’s possible that the recent spike in these fatal accidents could be caused by:

The trucking industry has had a shortage of drivers for the last 15 years, and the problem is getting worse. The American Trucking Associations estimates a shortage of around 50,000 drivers for long-haul jobs. This puts added pressure on existing drivers to take more routes and complete them in less time.

The average age of a commercial truck driver is 55, according to the Bureau of Labor Statistics. Given the demands of the job, older drivers can become a safety risk. Older drivers often suffer from sleep apnea, which can make them extremely fatigued during the day and susceptible to falling asleep at the wheel.

Cell phones, navigation systems, and driver-assist technology can be major sources of distraction for a truck driver. While technology is supposed to increase safety, it often does just the opposite when a driver is programming a GPS system or reading a text when he should be focused on driving.