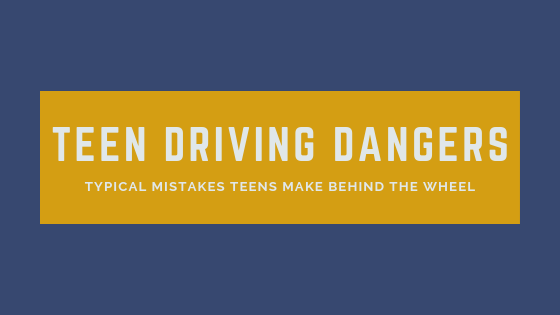 Getting a driver’s license is one of the most exciting things to happen to a teen. However, this newfound freedom comes with dangers. According to the CDC, motor vehicle crashes are the leading cause of death in teens. Getting behind the wheel is a great responsibility, and it’s important to be aware of the most common mistakes teens make while driving.

Driving academies typically teach students the fundamentals of driving in 30 hours of classroom time and several hours of experience on the road. However, teens lack awareness when they’re first learning to drive. Developing situational awareness so a teen driver knows the road, other motorists, and potential obstacles or hazards while on the move happens over time.

Keeping your eyes on the road is the first step to driving safely. Changing the radio station, watching a GPS, eating while driving, texting and answering a phone call are all examples of getting distracted and increasing the chances of getting in a car crash.

Brad Parker says, “In my experience, texting while driving is without question the greatest distraction for teen drivers today. Teens don’t seem to understand that doing this will prohibit the ability to respond appropriately to potential trouble on the road.”

When starting out, it’s important for a new teen driver to either drive with a parent or guardian, or alone. When their friends get in the car, the risk of causing a car crash increases. Having passengers in the car can lead to the first common mistake…distractions.

“When teen passengers are in the car, they should be discouraged from engaging the driver. They should help them keep their mind on what they are doing and help them concentrate,” Brad says.

Teens don’t always realize the importance of maintaining a proper following distance of at least three seconds between them and the car driving ahead of them. It’s also important that when coming to a stop, they can see the back tires and a bit of pavement behind the car in front of them. Teens often make the mistake of ignoring the role that speed plays in following distance. As speed increases, so should following distance to account for the additional total stopping distance that will be required.

When you’re an inexperienced driver, you’re faced with several unfamiliar situations, and adding high speeds typically end in negative results. By reducing speed and increasing awareness, a teen driver could avoid being in a serious accident or causing one.

6. Driving Under the Influence

Driving under the influence is an unfortunate mistake that drivers of any age can make. Young drivers, especially teens in high school, have been noted as commonly getting behind the wheel after consuming alcohol. The dangers of drinking and driving often result in a range of serious consequences.

This one doesn’t just apply to inexperienced drivers. Teens should always be checking their mirrors to make sure they know where other vehicles are even if they aren’t changing lanes.

8. Not Wearing a Seatbelt

Roughly two out of every four teenagers involved in a fatal crash were not wearing a seatbelt. Buckling up should be a habit that teens see modeled before they ever get their driver’s license. Everyone in the vehicle should wear a seatbelt every single time the car is moving.

If you've been injured in a car accident you need to speak with an experienced car accident lawyer as soon as possible. Contact us online or call our Bedford office directly at 817.440.3888 to schedule your free consultation.