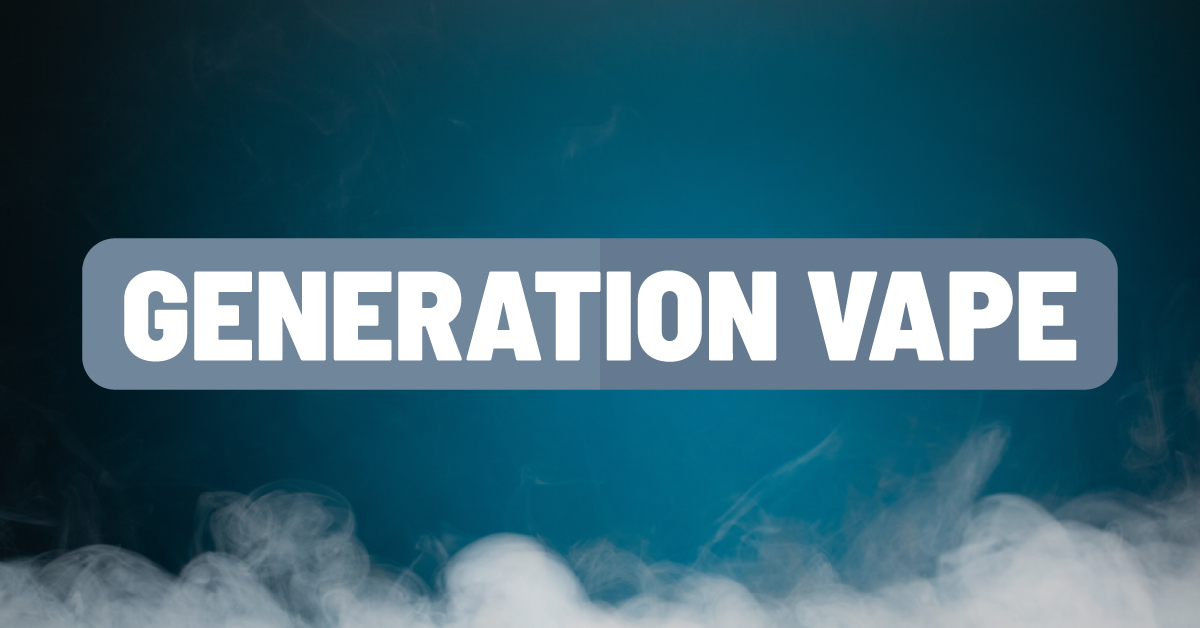 Targeting teens through incredibly effective social media campaigns, e-cigarette manufacturers are appealing to youth by offering sweet, kid-friendly flavors for nicotine. With no real regulation, e-cigarette aerosol contains ingredients that are extremely harmful to the lungs. Some e-cigarette flavorings may not be banned from use because they are safe to eat, however they are not safe to inhale because the gut can process more substances than the lungs.

These vaping devices are also commonly used to deliver other drugs, including marijuana. In 2016, it was reported that approximately one-third of U.S. middle and high school students who have ever used an e-cigarette reported using marijuana in the device.

Many of them are vaping on school grounds because of how easy it is to conceal. Brad Parker says, “I think it is absolutely the responsibility of the school to monitor students and ensure they aren’t vaping at school. I also believe that these manufacturers using marketing tactics aimed at attracting teens should be held accountable.”

What is an e-cigarette?

There are many names for electronic delivery systems (ENDS). Most commonly they are referred to as e-cigarettes, but they are also called vapes, vape pens, e-cigs, mods and tanks. JUUL is the leading brand among youth, and the term “JUULing” has become synonymous with vaping.

E-cigarettes operate by heating a liquid to high enough temperatures that it produces an aerosol that is inhaled. Unlike vapor, which is simply a substance in gas form, the aerosol from an e-cigarette contains tiny chemical particles from both the liquid solution and the device.

The latest e-cigarettes produced have a sleek, high-tech design and are easily rechargeable. JUUL emerged in 2015 and established itself as a leading e-cigarette product, comprising nearly three-quarters of the e-cigarette marketplace by July of last year. 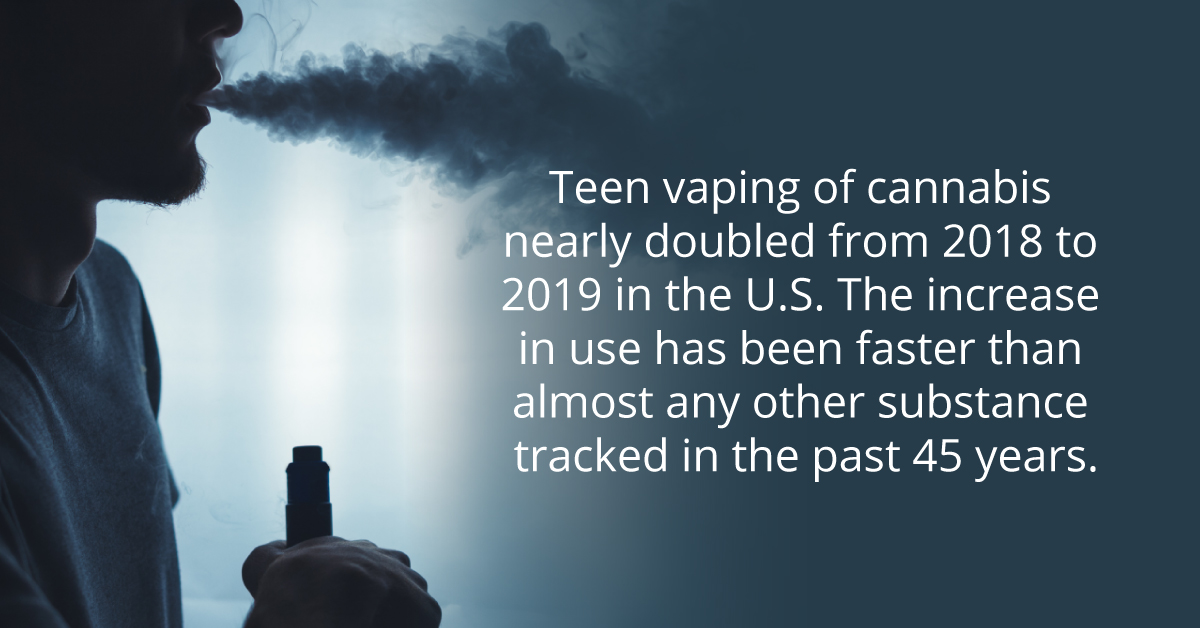 What is IN an e-cigarette?

One of the biggest problems with e-cigarettes is that you never really know exactly what is in them. The nicotine levels are highly variable, and what’s on the label is not a reliable indicator of the nicotine content. Mislabeling is a common complication.

Vaping is appealing to teens because of the endless flavors offered. There are common sweet flavors like vanilla, strawberry and cherry, as well as more bizarre flavors like cereal and buttered popcorn. With vaping liquids of any flavor, you can never be 100 percent sure of what you're inhaling. For instance, the chemicals that go into creating the cinnamon flavor is among the most toxic in terms of damaging white blood cells. The cinnamon flavoring can impair the ability of the lungs to get rid of mucus.

A large portion of teens are using e-cigarettes to vape THC, either exclusively or in combination with nicotine. Teen vaping of cannabis nearly doubled from 2018 to 2019. The increase in use has been faster than almost any other substance tracked in the past 45 years. Only the rise in vaping nicotine from 2017 to 2018 was faster. Vaping marijuana is easy for teens to hide. They don’t leave behind a mess or an odor, and many vape devices can be concealed in the palm of the hand.

The Centers for Disease Control and Prevention (CDC) has also recently identified vitamin E acetate, a chemical found most often in illegal THC vaping products, as a primary chemical of concern in the outbreak. Heavy metals such as lead, nickel, tin and copper have all been detected in aerosols produced by e-cigarettes.

What are the health effects of vaping?

Brad says, “The scary truth is, no one knows the long-term effects of e-cigarette use.” Evidence thus far has shown the most adverse effects on lung and cardiovascular health. Symptoms associated with vaping include a chronic cough, bronchitis, asthma, inflammatory disease of the respiratory system (pneumonia and interstitial lung disease), cell toxicity, cell death, impaired immune cell function in the lungs, increased chance for lung cancer, not to mention nicotine and/or drug addiction.

The carbonyl compounds from e-cigarette aerosol have been associated with increased risk of blood clots and atherosclerosis (a disease where plaque coats the arteries and narrows blood flow. Accidental ingestion of the liquids used in e-cigarettes can be very dangerous and even fatal.

The Food and Drug Administration (FDA) reported that as of August 2019 they had received nearly 150 reports of seizure or other neurological symptoms that occurred between 2010 and 2019 associated with vaping. A national outbreak of severe lung injury associated with e-cigarette use is being investigated by the CDC, FDA and state and local health departments. Calling the disease EVALI (E-cigarette or Vaping product us Associated Lung Injury), more than 2,000 cases have been reported as of Nov. 5, 2019, with 39 confirmed deaths in 24 states.

How are these products being marketed?

Teens are targeted and exposed to pro-tobacco content and advertising most heavily on social media. Marketing research has shown that mobile ads may attempt to capitalize on young audiences by highlighting the product as cool or sexy and by featuring flavored ads. JUUL has also targeted children as young as third grade by funding summer camps, visiting schools and paying community and church groups to distribute their materials.

Some e-liquids have been marketed to appeal to youth by looking like common food items such as Girl Scout cookie flavors and popular candies. E-cigarettes are easily accessed. They are sold online and at convenience stores, pharmacies, gas stations and tobacco shops.

What are the legal challenges?

While there are a series of lawsuits brought against e-cig manufacturers, Brad says, “It is extremely difficult, time-consuming and costly to pursue a product liability case. Unlike other types of negligence cases, pursuing a product liability case usually requires filing suit, expensive expert witnesses and an even longer litigation process. That being said, people choosing to sue after an injury or death from an e-cigarette may be able to collect compensation for their injuries, medical debt, and pain and suffering under Texas product liability laws.”

What is being done to deter the teen vaping epidemic?

The FDA is responsible for establishing product standards and regulating e-cigarettes including importing, packaging, labeling, advertising, promotion, sales and distribution of e-cigarettes. One of the most important steps taken thus far was establishing a federal minimum age of 18 for the sale of all tobacco products, including e-cigarettes. Retailers must check IDs of everyone under age 27. In March of last year, the FDA made a proposal to limit the sales of flavored e-cigs to age-restricted locations and also place a limit on the quantity that a customer may purchase within a certain time period.

The FDA sent JUUL a warning letter regarding their marketing tactics in October 2019. They said that marketing materials of e-cigs can’t make false claims about the safety of their product. It was also established that e-cigarette products where labeling or advertising is misleading will be considered to be misbranded under the Tobacco Control Act.

In 2018, the FDA required that a nicotine warning label must appear on all e-cigarette products reading: WARNING: This product contains nicotine. Nicotine is an addictive chemical. The warning label must comprise 30% of the two principal display panels and be in a large, legible font.

Currently there is no federal tax on e-cigarettes. Twenty states in the U.S. have put a tax in place for e-cigs in hopes to discouraging use among youth because of price increases. Late last year, governors in many states used their emergency executive powers to temporarily ban both online and in-store sales of flavored e-cigarettes.