You could be correct.

More and more insurance agencies are turning to surveillance teams to dig up anything to discredit significant activity restrictions and long-term disability claims. And I mean ANYTHING ... one video just shows a man simply taking out a small trash bag.

It only took a quick Google search to drudge up some local example. And some, like this business owner in Texas below, use every possible reason, even religion, to crow about this duplicitous behavior that endangers real, honest claims. 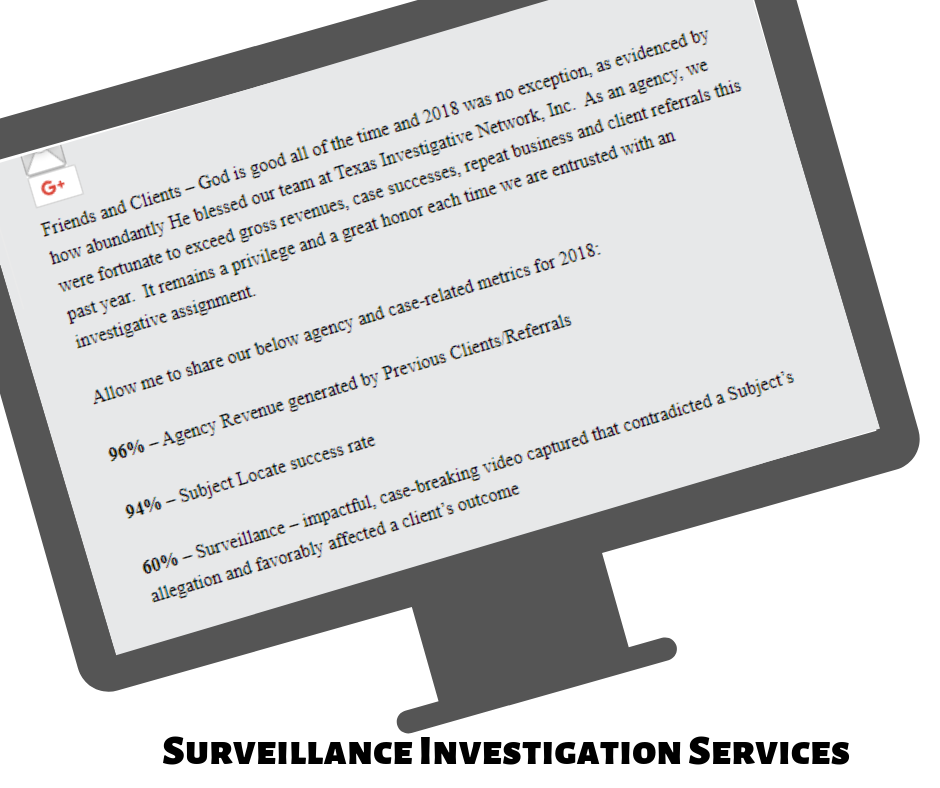 The above example isn't even that unique.

Look, the insurance companies aren't trying to play fair. They are trying to make a profit, even if that means an innocent Bedford victim is hurt. Bottom line – it's easier to hire a spy than pay a claim.

Yes, when an insurer suspects a claimant is exaggerating or flat-out lying about how injured they really are, then insurers have the right to lawfully surveil in public spaces. They claim it is necessary to independently verify the accuracy of the claim, i.e. how well you function.

After all, the Coalition Against Insurance Fraud estimates that $80 billion a year is paid out in fraudulent claims. However, insurers often use this stat as a pretense to delay, underpay and deny legitimate claims.

There are restrictions. The surveillance person cannot knock on your door, peer in your windows or look over your fence. But it’s fair game if you are out walking your dog, playing with your kids at the park or even visiting the doctor’s office.

Often, surveillance is used when you have physical limitations that can be easily observed, such as a restriction to not lift anything over 10 pounds or to not bend over, but it has also been used in cases with claims of psychological impairments, such as someone who says they can no longer socialize.

The most likely time for surveillance to take place is when the insurer knows where you will be located. So, they may send someone to sit next to you at the doctor’s office or send a representative for a home visit.

If you step outside your door, you could be videotaped. The insurer also could request surveillance for several days or at various periods throughout the claim.

The person watching you will note your behavior and demeanor, such as:

Of course, these recordings often don’t show the whole picture.

A recording can show you picking up a child, but not show how you were laid out on your back for the entire next day. Still, these tapes are used as a means of discrediting you and showing that you are not credible when you say you are hurt.

But they aren’t just waiting for you outside.

They are crawling all over your social media and digital history, a step that is relatively low-cost and easy to complete. All popular social media channels can be searched.

Often, someone will scan through your social media pages, searching for instances where you aren’t following doctor’s orders. They will look at your posts, your employment status, your photographs and more to find examples.

The problem is that we all tend to put our best faces forward on social media. You may want to downplay the severity of the injuries to your friends and family, but in doing so, you are hurting your claim.

Or maybe you just update your job status. That could be taken as you starting a job search, even if you are just trying to connect with old coworkers.

What Happens If It Hurts Your Claim

Video surveillance doesn’t always hurt a claim. Sometimes, it simply shows an injured person looking and acting injured. In that case, it won’t hurt your credibility.

However, every snippet of activity that demonstrates you appearing healthy or not following medical instructions can cast doubt on your claim.

If you feel you are being watched, you can always call the police.

The number one rule the car crash attorneys at Parker Law Firm recommend is to follow your doctor’s recommendation specifically. Understand what actions are okay and what are off limits. Then, don’t rush the healing process. Your body needs it.

Remember not to talk about your health or your case on social media. Even if it is innocent, it could be used against you. Consider tightening your privacy settings and not accepting friend requests from people you don’t personally recognize.

Whether you were surveilled or not will come out in the Examination of Discovery. That’s when you need an experienced personal injury lawyer like Brad Parker, who understands how to fight back against insurance agents who fight dirty.