Parental Preparation For Your Teens 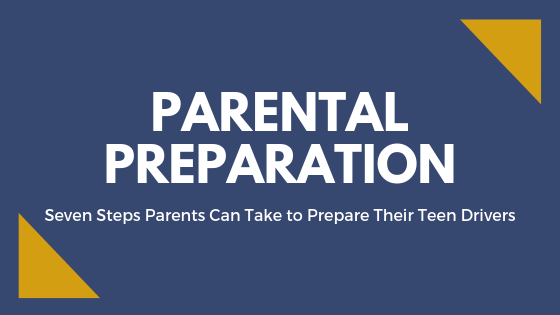 As a parent, having a new driver can be one of the most worrisome and nerve-wracking times of your adult life. Car crashes are the No. 1 killer of teens in the United States. In fact, the fatal crash rate for 15 – 17 year olds is nearly three times the rate for drivers age 20 and older.

To help highlight the continued challenges and bring awareness to this issue, Oct. 21 to 26 has been designated as Teen Driver Safety Week by the National Highway Traffic Safety Administration. Parents are the biggest influencers on teens’ choices behind the wheel, and they should take some important steps to help young drivers get as much good driving experience while remaining as safe as possible.

1. Enroll Them in a Driving Academy

While there are benefits of getting driver education online, such as convenience and comfort, in-class driver’s ed courses may be a better choice for your teen. Brad Parker says, “In my opinion, the in-person driving classes are superior to the online courses. Hands-on, real-world experience is always best!”

Parents should be the driver they want their child to be. If you use your cell phone, eat while driving, speed and tailgate, don’t be surprised if your teen thinks it’s totally normal driving behavior. Talk about safe driving habits early on. Tragically, seat belt use is lowest among teen drivers, so it’s imperative to always buckle up and instruct your child to do so as well.

3. Prohibit Cell Phone Use While Driving

As an adult, it’s hard enough to refrain from checking an email or sending a text while driving. You can imagine how difficult it is for teens to resist the temptation to check out their social media or text their friends from behind the wheel. Brad says, “When my daughters were teenagers, I repeatedly told them to leave their phones alone while they were driving. They shouldn’t even pick it up while the car was in motion.” Fortunately, there is a lot of new technology to help parents regulate their teen’s cell phone use and minimize distracted driving. Car manufacturers are also helping parents with teen drivers with built-in features such as automatic alerts for speed, assistance with volume control, features to ensure the driver is wearing a seatbelt and lane departure detection.

“More accidents happen between 9 p.m. and 2 a.m. than during the daylight hours. Setting a curfew for your teenage driver will minimize the risk that they will be in an accident,” Brad says. Set realistic curfews, but also let your teen know that if they are running late, it’s always better to drive safely than speed.

5. Monitor for Alcohol or Drug Use

Parents should talk to their teens about never engaging in driving while under the influence of drugs or alcohol. They should vigilantly watch for signs of alcohol or drug use and make sure that they know they can always call you to come get them if they get stranded at a party.

For the first six – 12 months, it’s a good idea to have teens only drive with adult passengers. Experienced drivers can offer teens helpful advice and correct bad driving behaviors. Friends or younger siblings can be huge distractions.

7. Have a Driving Agreement

Consider a written Parent-Teen Driving Agreement where you can specifically spell out the rules. Once your teen has signed it, put it somewhere they can view it often, such as the refrigerator. If your teenager breaks a rule, take the keys away for a period of time.

Comment below if you have any other tips you have found work in keeping your teenage driver safe on the roads.