Route 285 runs through Pecos, Texas, and Carlsbad, New Mexico and carries a large portion of the country’s oil industry along its roads.

But locals have a different name for this stretch of highway that ferries supplies to and from the oilfields of West Texas.

A Recipe for Disaster

Increased traffic. 18-wheel trucks. Driver shortages combined with a lack of safety training. All these conditions are coalescing to create a nexus of fatalities. And, as oil prices spike, so do the deaths, according to an article by the Dallas News.

Truck accidents have several common causes, almost all of them exacerbated by today’s oil needs. Driver fatigue, driver error, failure to obey traffic laws, and distracted driving are the causes of many accidents.

“When you’ve been in the oilfield for 10 to 11 days, working 14 hours a day, you just become so tired that you’re not thinking straight,” James Stroup, an experienced truck driver told the Dallas News in an interview. “You’re just brain dead because you’re living off four to six hours of sleep.”

Sections of this highway also simply weren’t built for the size of trucks that now dominate the road. That reality is coupled with the fact that not all of those large trucks are that well maintained. 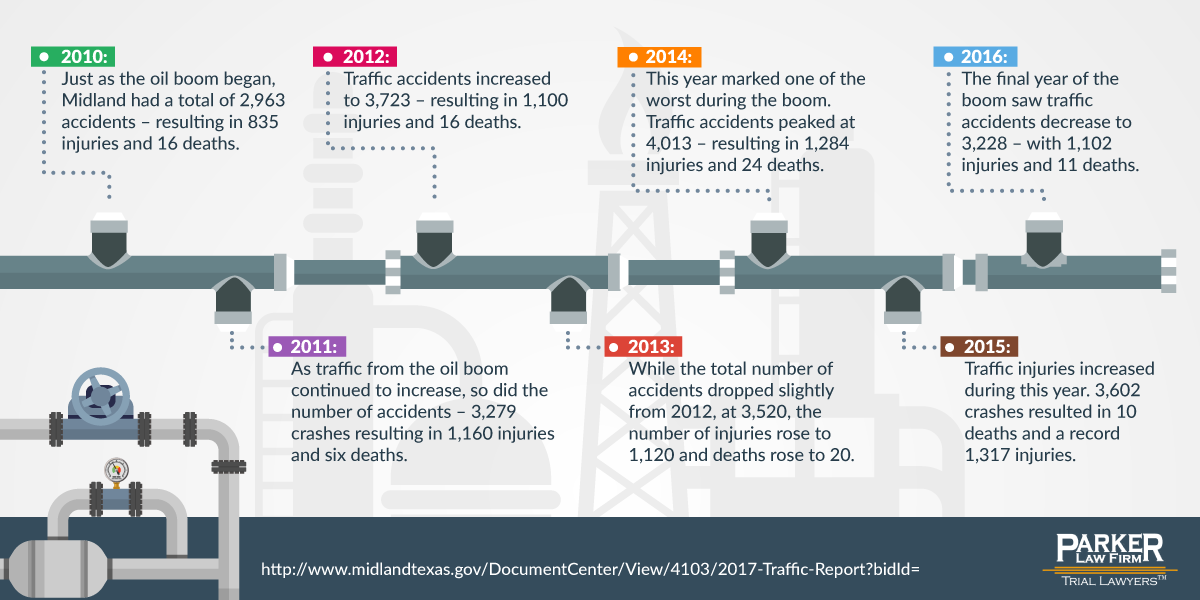 “The Texas Department of Public Safety is aware of and seeking to resolve some of these issues,” said Sergeant Oscar Villarreal in an interview the Dallas News. For one, speed limits, that were as high as 75 miles per hour, have been lowered. More troopers are monitoring the roadways. But, especially as the number of drivers increases and funding is difficult to come by, these solutions can only do so much.

Texas “can’t build new roads or widen roads overnight,” Villarreal said to the Dallas News. “Those things take time. We’ve had significant growth in the area” and “the roads don’t have time to keep up.”

A Midland Crash report details the dangerous situation – and how the deaths fluctuate in rhythm with the price of crude oil.

2011: As traffic from the oil boom continued to increase, so did the number of accidents – 3,279 crashes resulting in 1,160 injuries and six deaths.