Fun on the Fourth: Avoiding Injuries on Independence Day 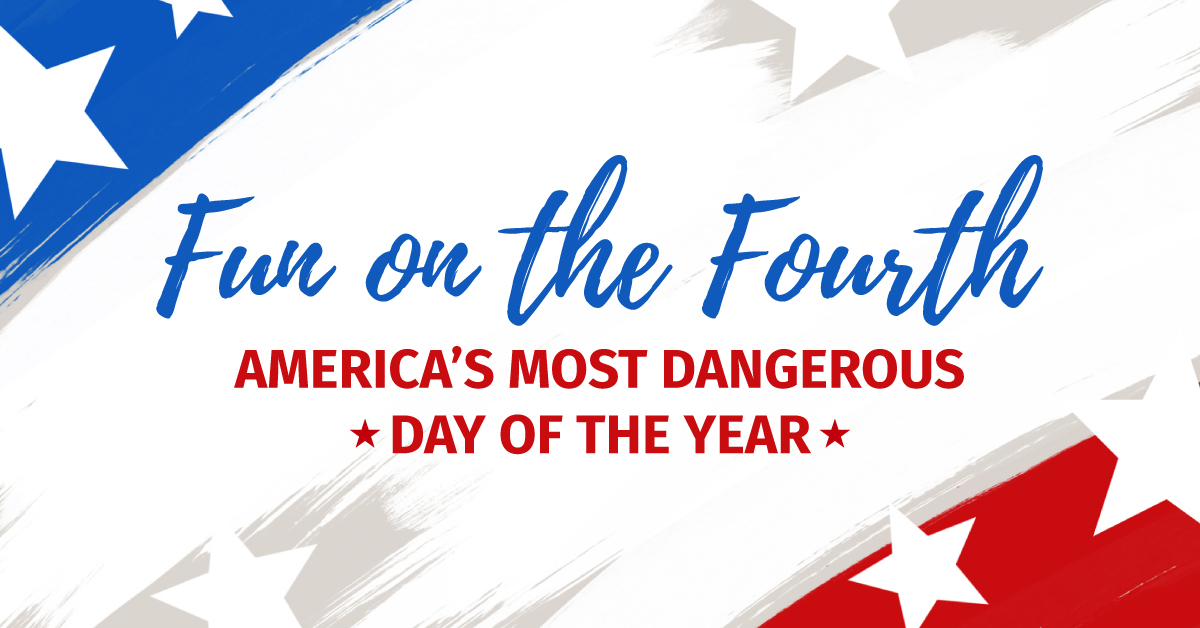 The National Safety Council (NSC) estimates 405 people may die on the nation’s roadways this Independence Day holiday. Because holidays are a time of travel for families across the United States and because many choose to travel by car, the Fourth becomes extremely dangerous due to celebrations involving alcohol consumption.

Brad Parker says, “Stay at home if you can, and if you can’t, then be smart. The summer heat, alcohol, fireworks and driving can all be ingredients for a disastrous recipe.”

Drunk driving remains the leading killer on our roads, and these senseless deaths are 100-percent preventable. Mothers Against Drunk Driving (MADD) is currently promoting its campaign that includes advocacy for stronger drunk driving laws including all-offender ignition interlocks, support for high-visibility law enforcement, support for advanced vehicle technologies and public support for these initiatives.

Drunk driving is not only dangerous, it is expensive. When caught driving under the influence, it can cost an offender thousands of dollars. According to the National Highway Traffic Safety Administration (NHTSA), a DUI arrest could cost up to $10,000, not to mention the loss of vehicle and driving privileges. The driver could face jail time, higher insurance rates and expenses from attorney fees, fines, car towing, repairs and lost time at work. That’s all outside of the most important cost of driving under the influence, the risk of killing others including family members riding in your car.

“The driver of the boat should never drink under any circumstances. The most prevalent cause that I see for boating accidents is excessive drinking. Lakes are overwhelmed with a large number of boaters during the Fourth of July, and when people are having too much fun in the sun, they stop paying attention to what they are doing,” Brad says.

Alcohol plays a role in nearly 80 percent of all boating accidents. “There really is no difference between a BUI (Boating Under the Influence) and DUI (Driving Under the Influence). If you refuse to take a breathalyzer, you can still lose your driver’s license.” Remember, there are no traffic rules out on the lake. “It’s so important that there is a lookout…someone to keep watch for other boats or unexpected obstacles, especially if there are skiers.”

Children under 13 years of age must wear a life vest in Texas, and there must be a personal flotation device for each person on board. “Don’t just have life jackets on the boat, but make sure everybody wears them. NO EXCEPTIONS. When an emergency happens, you shouldn’t be scurrying around and searching in a compartment. By then it’s too late,” Brad says.

According to the U.S. Consumer Product Safety Commission (CPSC), children under the age of 15 accounted for 36 percent of the injuries in emergency rooms on the Fourth of July. The parts of the body most often injured are hands and fingers, legs, eyes, face and ears. Forty-four percent of the emergency room visits were burns. Brad says, “In my opinion, little hands should never handle explosive fireworks. If they are going to handle fireworks, there should be significant adult supervision. Also…while the combination of drinking alcohol and blowing things up is commonplace, you should leave the fireworks up to the professionals.”

The National Highway Traffic Safety Administration (NHTSA) suggests that if you know you’ll be at a July 4th party and plan to drink, make plans ahead of time for a sober ride home or stay over. Even if you’ve had only one drink and think you are fine, designate a sober driver or plan to use public transportation or a ride service to get home safely.

Are you the designated driver? Don’t drink. You need to be the one who does not drink at all, not the one who has drank the least. Your responsible actions will keep you, your friends and loved ones, and others on the road safe. If you see a drunk driver on the road, safely pull over and call 911.

If you’re hosting a Fourth of July party, help your designated drivers out by making sure there are plenty of non-alcoholic beverages. Have a friend who is about to drive after drinking or smoking marijuana? Take the keys away and make arrangements to get your friend home safely. 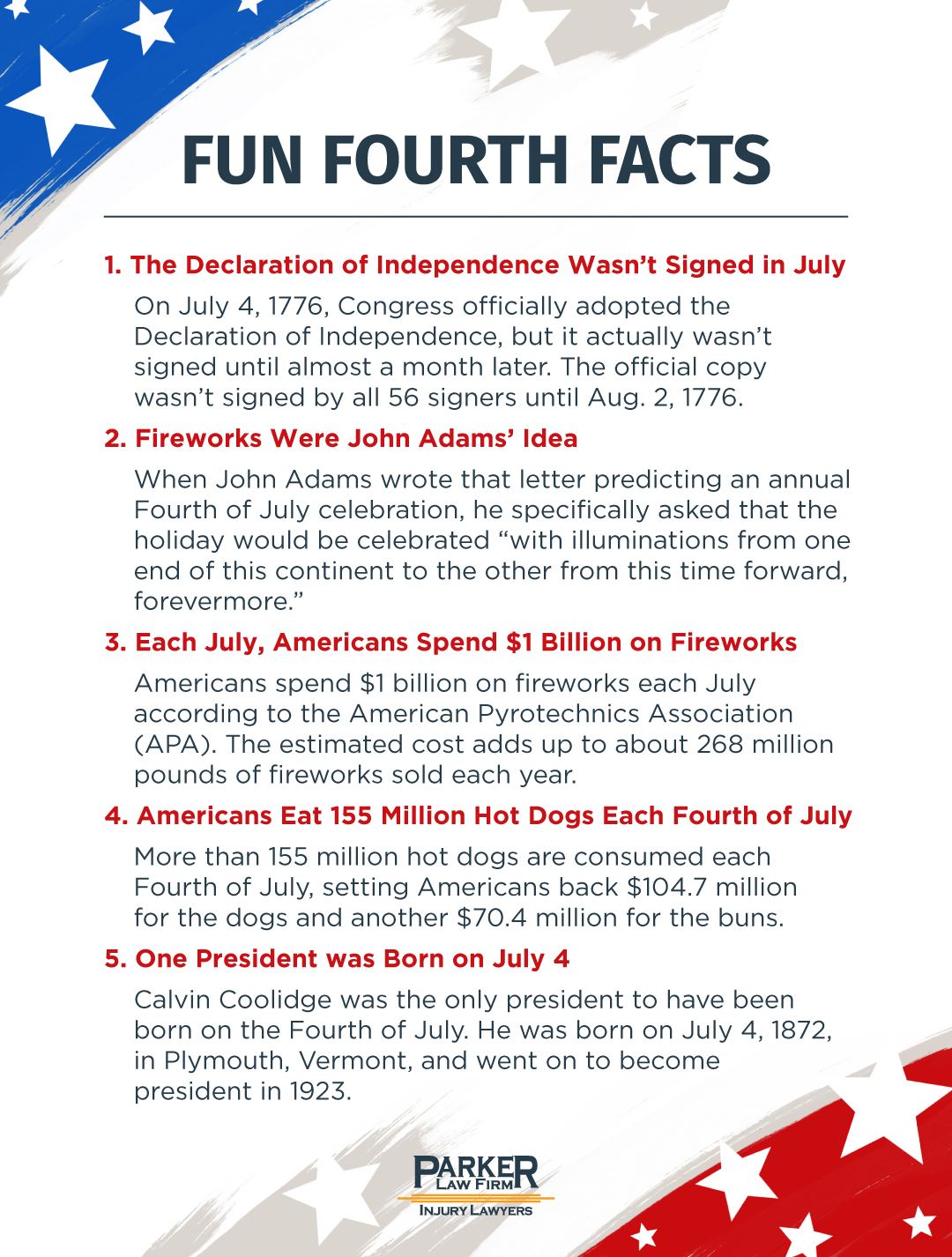 The Declaration of Independence Wasn’t Signed in July

On July 4, 1776, Congress officially adopted the Declaration of Independence, but it actually wasn’t signed until almost a month later. The official copy wasn’t signed by all 56 signers until Aug. 2, 1776.

When John Adams wrote that letter predicting an annual Fourth of July celebration, he specifically asked that the holiday would be celebrated “with illuminations from one end of this continent to the other from this time forward, forevermore.”

Americans spend $1 billion on fireworks each July according to the American Pyrotechnics Association (APA). The estimated cost adds up to about 268 million pounds of fireworks sold each year.

One President was Born on July 4

Calvin Coolidge was the only president to have been born on the Fourth of July. He was born on July 4, 1872, in Plymouth, Vermont, and went on to become president in 1923.